A week of records in Euroland, Denmark and Wimbledon

Last week saw the ECB lower its policy rate to the lowest level in its history. A meager 0,75 % is the rate on main financing operations. Not much, not surprising, and probably not what will make much of a difference for the dire straits of the European economies.

The rate cut was the impetus for a record in Denmark as well in last week. Apart from Frederik Løchte Nielsen’s unbelievable feat of becoming the first ever Danish Wimbledon champion (in doubles with English Jonathan Marray), the central bank of Denmark also cut rates thereby introducing a negative deposit rate (for 7-day deposits) for the first time in history. Denmark has therefore essentially hit the zero lower bound of interest rates with the overnight rates at precisely zero, and a loans rate of 0,2 %.

In the figure below one sees the Euro policy rate and Danish policy rate since the inception of the Euro. As Denmark in 1999 continued its fixed nominal exchange rate policy, now with the Euro replacing the D-Mark as the anchor, the policy rate has more or less followed the Euro rate. This is to be expected for a small open economy where credibility of the policy is only disrupted in times of turmoil, leading to occasional upwards deviations in the Danish policy rate so as to defend the parity.

This has also been the picture ever since this policy was firmly adhered to in the mid 1980s. The rule of thumb was that the Danish central bank followed any movement in the German or, now Euro, interest rate. A small interest-rate differential, however, was to be expected as a “price” of being outside the Euro; e.g., one could see it as a combination of a liquidity and risk premium on the Danish currency. 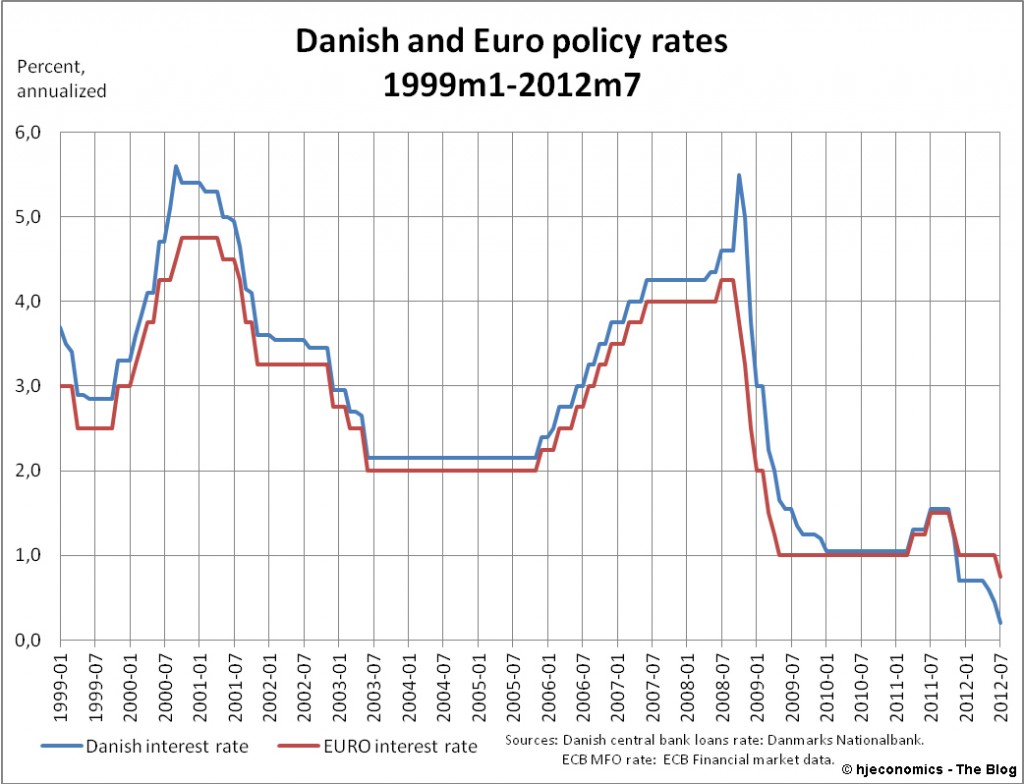 This differential is seen in the figure below. In times of turmoil, like in the fall of 2008, the Danish central bank has had to defend the parity by keeping rates above the Euro rate for a period. But as the ECB in late 2011 lowered rates again (after two increases) mainly in light of the European debt crises, something happened that gave new meaning to the term “defending your currency”. Suddenly, investors did not find bonds of Euro countries particularly attractive, and they started to invest in Danish bonds, driving the yields on short-term bonds into (slightly) negative territory.

This caused pressure on the parity in upwards direction. So to defend it, i.e., to avoid an appreciation, the Danish policy rate was lowered further than the Euro rate, bringing forth a negative interest-rate spread. 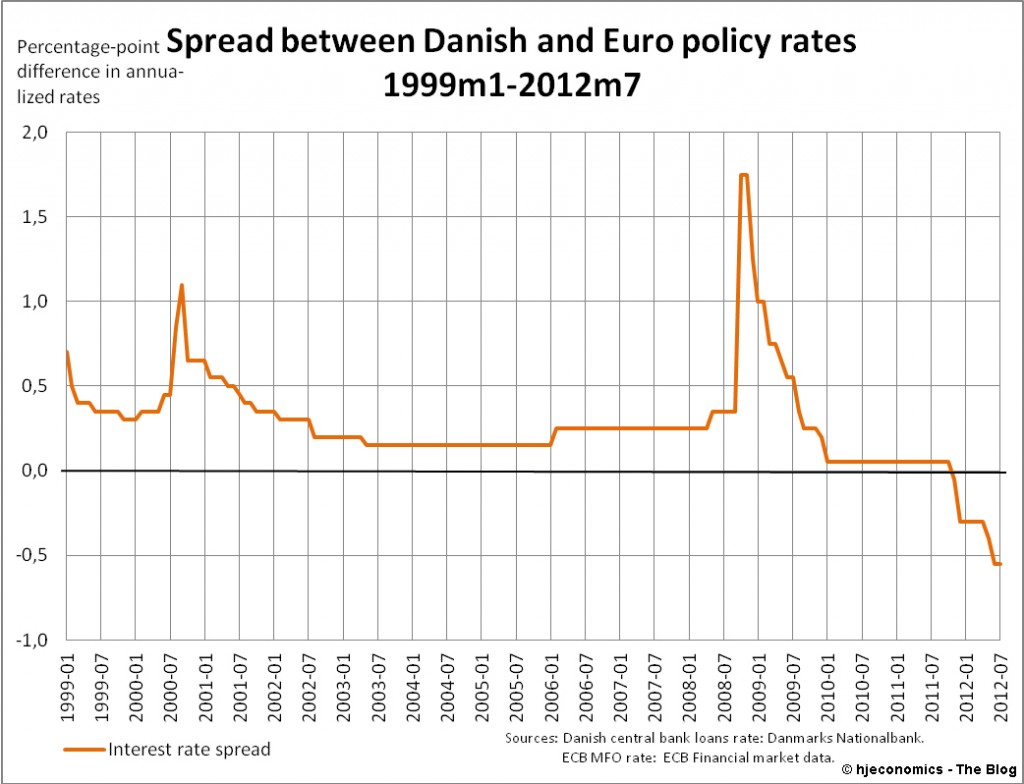 The spread in policy rates is currently -0,55 %, but the policy actions last week did not cause that. Rates were simply adjusted by the same amount as the ECB. So, Denmark is currently experiencing times where to defend our currency we have to be more expansive than the record-breaking ECB. If the ECB should lower rates further, the zero lower bound on loans rates may bind, but this should be a minor problem: You can always avoid an appreciation of your currency by creating more of it.

Even though this expansive stance is beneficial for the struggling Danish economy per se, the backdrop of this situation (which was unthinkable when I was “raised” as an economist); however, is a sheer horror story. The Euro area is bleeding as politicians have repeatedly and consistently ignored the rules and regulations they have created to make up for the bad fiscal incentives a currency union creates. Adding new rules (like the new fiscal compact) is probably too much too late, as it is hard to be convinced that politicians should suddenly stop thinking and acting in a shortsighted and selfish manner.

One Response to A week of records in Euroland, Denmark and Wimbledon