I recently wrote that USA had now entered the club of inflation targeting banks. This occurred when the Federal Reserve in April last year officially started mentioning an explicit inflation target, and also introduced press conferences after its policy meetings. Thereby, central criteria for being considered an inflation targeter were met.

Following its January 25 meeting, the Fed initiated immediate publication of projections for the paths for main macroeconomic indicators (they have been available at least since October 2007 in slightly different style, but then along with the minutes of meetings which are published three weeks after the policy decision). The projections are presented along with “confidence bands,” in a manner visually similar to the presentational style of many inflation-targeting central banks (e.g., Bank of England, Sveriges Riksbank, Norges Bank, etc.). Figure 1 shows the current projections for real GDP, unemployment and inflation: 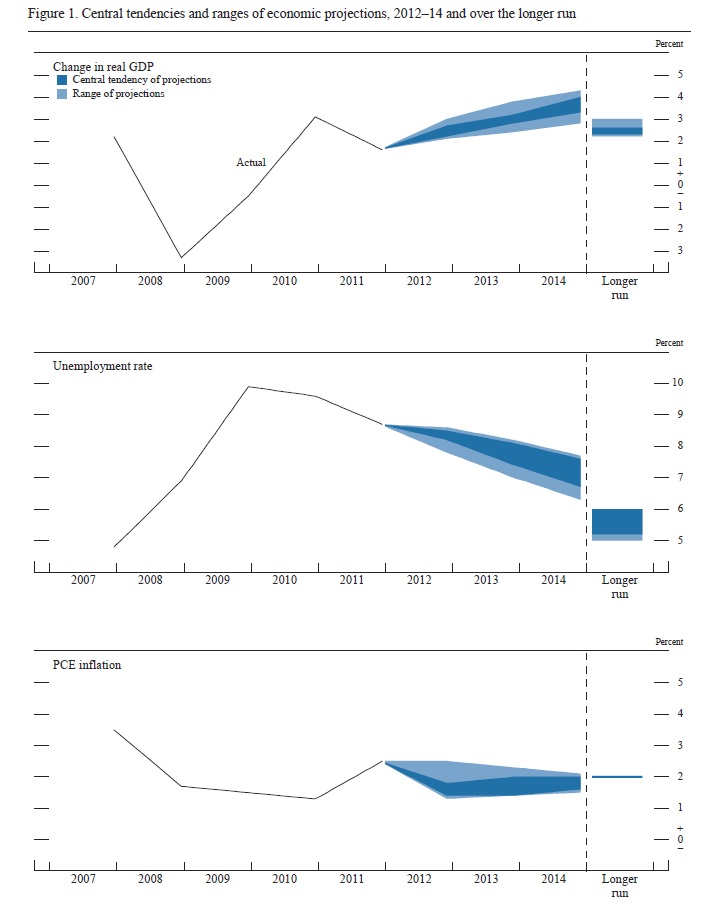 Where these charts differ from those of many other inflation-targeting central banks, is that the uncertainty embedded in the fan charts is not statistically based, in the sense that the charts are based on some economic model (and the standard deviations drawn from it). Instead, the variations reflect the FOMC members’ individual projections.  Thereby, they reveal the range of disagreement over economic developments, and thus monetary policy among members. This disagreement is further highlighted in the figure that explicitly shows the distribution of the members’ view on the appropriate interest rate now as well as in the future. This is an example of a high degree of transparency in Fed policymaking. Previously, dissent was immediately mentioned, but here it is quantified (like the projections, this information has been provided since at least October 2007, but then after the fact along with the publication of minutes). 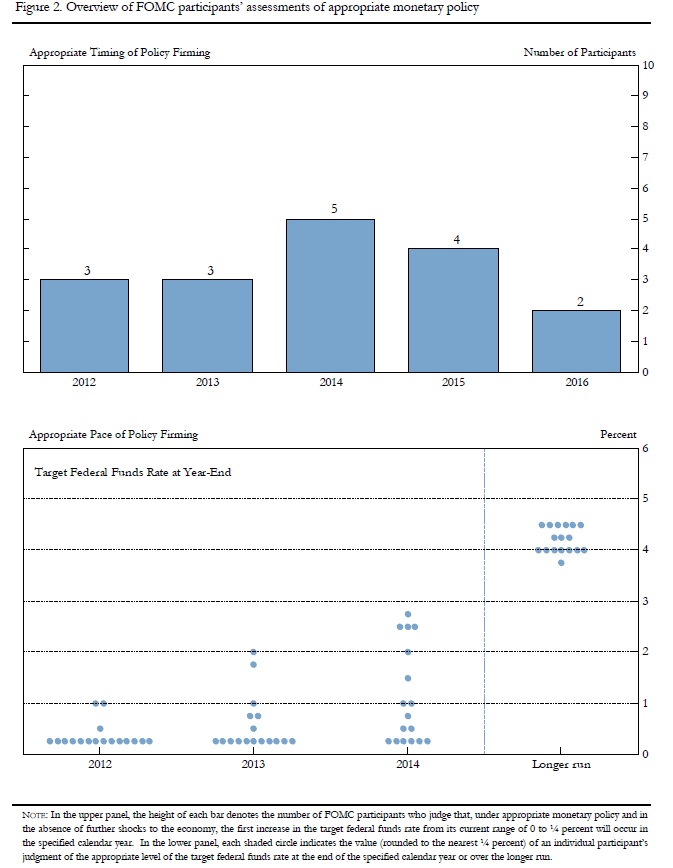 While there is strong agreement to keep rates unchanged at the 0-0.25% interval throughout this year, 8 of 17 members judge the appropriate rate to be at 1% or more at the end of 2014. In the recent policy statement, this is considered an unlikely scenario. This brings me to a point of criticism. While the figures are clear, and honestly describe the (non-trivial) disagreement over economic developments and thus monetary policy, the market signal effect may be obscured by the anonymity. Since monetary policy actions are determined by only a subset of the 17 FOMC members, and since the composition of the FOMC vary according to a fixed rotation scheme, if would be helpful to get faces on the dots. If the two members desiring 2 and 1.75%, respectively, in 2013 are from Reserve Banks not in a voting capacity that year, one could discount these dots heavily. If, on the other hand, one of these dots belonged to Ben Bernanke, one could clearly not (this is in all likelihood not the case, but just for illustration’s sake).

So, while the immediate publication of projections and individual views on policy stance is a big step towards greater transparency, and yet a confirmation that the label “inflation targeter” is appropriate, a lot of ambiguity remains when this anonymity is retained.

One Response to Fed “Fan Charts”