In turbulent times where people fight for democracy in Egypt and elsewhere, I feel privileged to live in a country where the most important issue on the political agenda is whether a state-subsidized early retirement scheme should be gradually removed or should remain. This is indeed THE BIG ISSUE in Denmark today, and one that will be viciously debated until the next general election (the date of that is not yet determined, so this could go on for at least half a year).

Yes, I know it is not appropriate to feel good about yourself when others suffer and fight for matters one takes as natural and given. But I am only human, and I suddenly found it downright comical that well-educated people could scream at each other on national TV over an issue, which compared to other problems, precisely reflects how spoiled we can become in the wealthier parts of the world. And in this case so spoiled that many refuse to see the general picture, and instead fight for their downright selfish and antisocial agenda.

Denmark has had an early retirement scheme since 1979, which essentially allows workers to retire 5 years before the regular pension age (with that currently being 65, you can retire at 60). During that period they receive a maximum of 90% of unemployment benefits. The only requirement is that they should be able to work(!). During the years, the reform has undergone changes, and since 1999 one has to be member of an unemployment insurance organization for 25 years, and pay some monthly fee in order to be eligible for early retirement (that change basically destroyed the then prime minister’s last bit of popularity: now people actually had pay for some of the benefits you could receive). It is, however, still the state that guarantees the pension payments. Originally, the background for implementing the early retirement scheme was two-fold. On the one hand, one wanted to help workers, who were worn out from a long life of hard work, to an early relief, on the other hand one wanted to reduce unemployment by freeing up jobs to younger workers. There was therefore both a social and a macroeconomic dimension to the scheme.

As for the social dimension, I am very sympathetic. If you are worn out after 40 years of hard physical work, I am all in favor for some relief. The problem is just that the way the scheme is constructed, one can go on early retirement also if you (as me) have been sitting on your butt for most of your working life. And we already have particular schemes for persons who for either physical or mental reasons are unable to work anymore. So, essentially the scheme is one of a state-subsidized reduction in labor supply. And this is why the government has proposed it should gradually be abandoned, since Denmark is facing severe fiscal problems in the not-so-distant future due to the aging population. We therefore need to increase the labor supply, or, as a minimum, counteract the demographically-induced decline. Otherwise, finances for other, and more basic, welfare measures could become endangered.

That brings me to the macroeconomic dimension, which is also what causes the most controversy. Most people simply refuse the logic of macroeconomists when these explain that changes in labor supply normally only have temporary effects on unemployment. So right now, where Danish unemployment has been steadily rising after the crisis – now peaking at around 6 % – most argue that abandoning the early retirement scheme, will increase labor supply and therefore increase unemployment. The result will be a worsening of the fiscal deficit (unemployed are more expensive to support that early retirees), and a first step towards a deterioration of the Danish Welfare State. If you claim otherwise (i.e., if you are an economist), you are told that you cannot do simple algebra.

I would say that this is an exceptionally short-sighted view on the world. A short-sightedness which does not serve a dynamic problem involving the evolution of debt and deficits in an aging population. At best it serves the current few who will miss out on an expected state-subsidized pension (and, yes, I would also be mad if this had hit me personally), at the expense of the future many. But the opposition has a wonderful case against the government, as arguments based on shortsighted “logic” always win over sensible, and scientifically based, arguments concerning a longer perspective. And indeed all mainstream economic models predict that the increase in unemployment following an increase in labor supply is temporary. Over time, the increase will be transformed into jobs (after wage and investment adjustments), and the end result will be higher GDP. I.e., a bigger cake for the same number of people to share. THAT is solidarity! Not insisting on paying people for doing nothing.

Here are some raw numbers covering the period 1978 to 2008 (so the latest surge in unemployment is not in the picture). As evident, there is quite a few people on early retirement; in recent years more than genuinely unemployed. One also sees that unemployment has its business cycle fluctuations, which appear largely unaffected by the reduction in labor supply caused by early retirement. 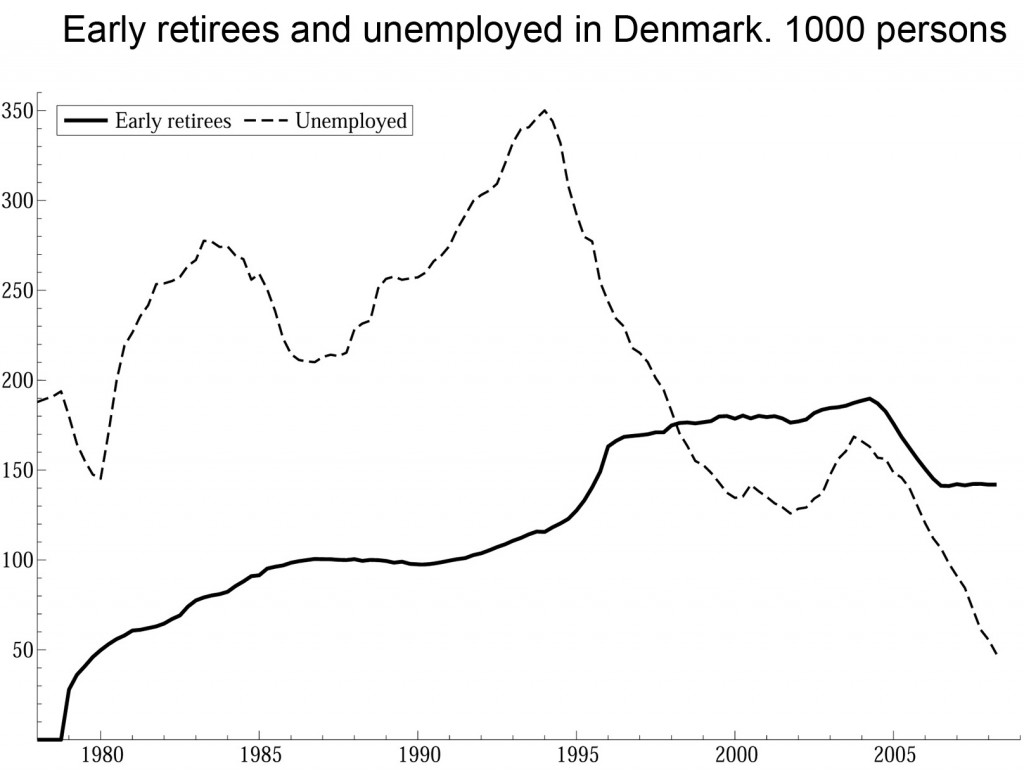 The other figure shows a scatter plot of the Danish labor supply and employment rate. I can’t see any clear negative pattern as early retirement proponents would seem to envision. Probably there is no pattern. 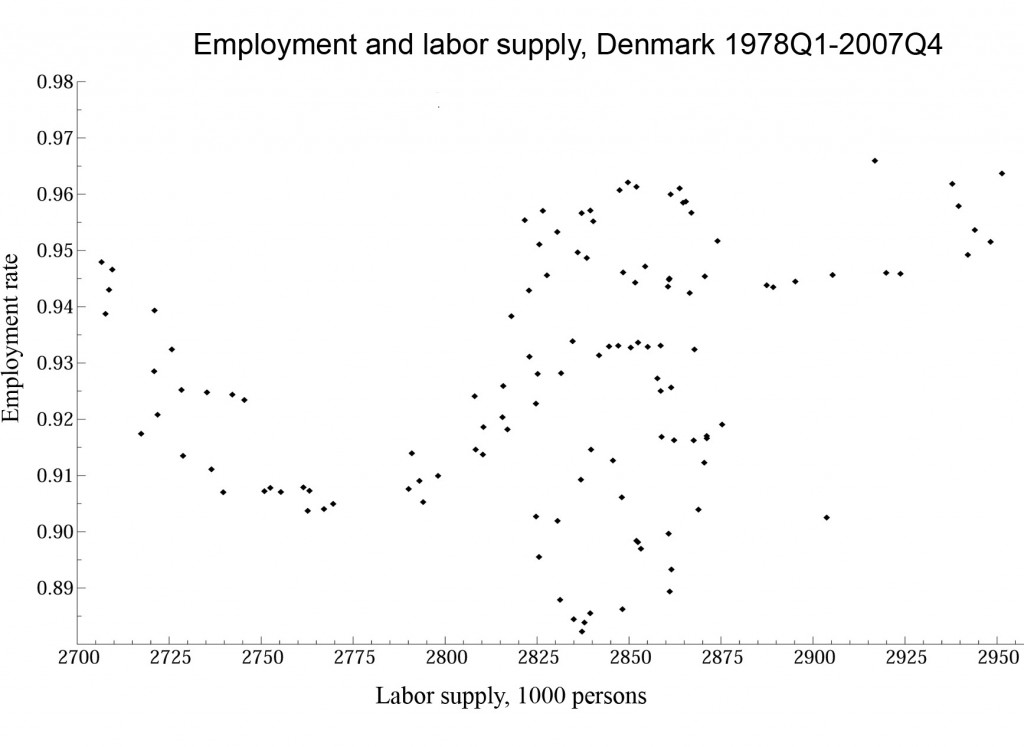 These simple graphs prove nothing in themselves, but they do, hopefully, show that being in total denial about the employment effects of labor supply is probably not the most productive approach to this issue.