After the financial crisis hit in 2008, new acronyms have been appearing at a rapid pace around the globe. These mainly describe the various measures taken by the world’s central banks to offset the troubles caused by the crisis. Many took the form of liquidity provisions to aid “frozen” banking markets. The European Central Bank launched on May 14, 2010 a so-called Securities Market Programme (SMP), under which it – temporarily – allows itself to purchase Euro denominated government bonds. In its decision, the ECB motivated the move by

“ . . . in view of the current exceptional circumstances in financial markets, characterised by severe tensions in certain market segments which are hampering the monetary policy transmission mechanism and thereby the effective conduct of monetary policy oriented towards price stability in the medium term, a temporary securities markets programme . . . should be initiated. (…) the ECB . . . may conduct outright interventions in the euro area public and private debt securities markets” (Official Journal of the European Union, ECB/2010/5, 2010/281/EU)

Elsewhere, I have questioned whether this is in accordance with the Treaty of the European Union, which outlaws any “purchase directly from them by the ECB or national central banks of debt instruments“ (Article 21.1 in the statutes, where “them” explicitly includes central governments). The ECB may also have had some doubts about the legality of the operation, since it in the above-quoted document is so keen on emphasizing that the initiative should be seen as a way of making the monetary transmission mechanism work to effectively secure the goal of price stability. On this, however, I am a little lost. I am quite convinced that these “certain market segments” are the markets for certain governments’ debt. And yes, some governments’ debt have been hard to sell, but for a reason. How it hampers the conduct of monetary policy, however, is not spelled out particularly clear. It may severely hamper the conduct of fiscal policy for some of the involved governments, but this is not the ECB’s problem.

Another way the ECB has tried to avoid that the SMP in any way could be seen as a monetization of some countries’ public debt obligations, is the emphasis that there would be no liquidity effects of the programme. ECB president Jean-Claude Trichet did from the beginning emphasize that “we are not embarking on quantitative easing” (incidentally, in this interview Trichet also states that the programme is not violating the letters of Treaty; I obviously don’t understand article 21 then). In that respect, the ECB has done what it can to live up to its statements: Continuously, the ECB has sucked up liquidity from the market by offering 1-week interest-rate bearing tender deposits up to an amount matching that of the purchased bonds (and with success most of the times). As of today this amount is around Euro 80bn.

The SMP is in relative numbers not a huge programme, but taking a look at the asset side of the ECBs balance sheet, one can see the jump in “Securities, General Government”, which from April to December 2010 increased by Euro 82bn: 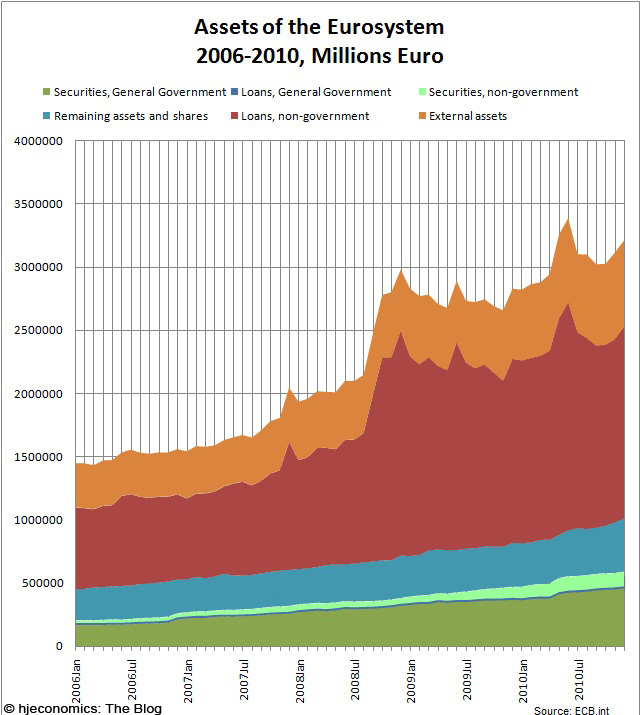 Now, in order to address the question posed in the title of this post, things get blurry. The main fluctuations in the ECB’s balance sheet arise from transactions with the MFIs (Monetary and Financial institutions). On the asset side, these are predominantly the non-governmental loans (the reddish area). On the liability side of ECB’s balance sheet, these are the deposit liabilities (also the reddish area): 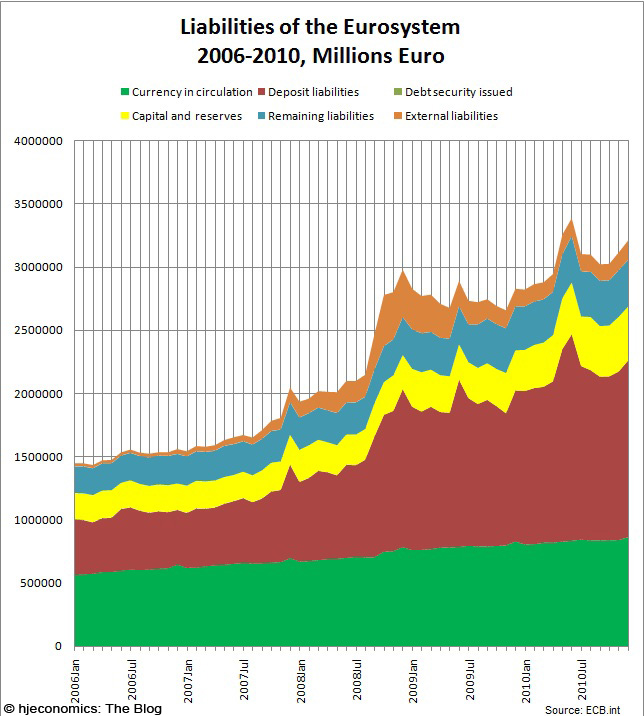 Given the size of the stocks arising from these transactions, it is not visible where the funds from the purchase of the government securities are coming from. There is a big jump in deposit liabilities around May 2010, which could look as monetary financing. But that is deceiving, since the ECB as mentioned indeed has withdrawn liquidity arising from the purchases as immediately as possible.

I.e., it has “sterilized” the liquidity created by the asset purchases. If the SMP is to be neutral on the balance sheet (that would be one way of securing that it does not involve quantitative easing), some assets must therefore be correspondingly depleted. With the tender deposit schemes, the ECB is effectively borrowing funds from the MFIs. Hence, its net asset position in terms of non-government loans is going down (along with its deposit liabilities), parallel with the increase in government asset positions. Sufficiently many other transactions in that department, however, make this invisible in the figures.

So one answer to the question of who pays for what, is that the ECB is buying government bonds of unknown origin by taking very short-term loans from private MFIs; loans which are refinanced on a week-to-week basis. Whether this is a good idea is impossible to say, as the secrecy about which government bonds are purchased makes any judgment about the changes in the composition of ECB’s assets highly speculative. One could guess, however, that their assets have become riskier. The MFIs on the other hand, may accordingly have gotten rid of some “bad bonds”, and are even paid a premium in the process (the tender rate)! In any case, what the ECB is doing is clearly not monetary policy, but rather what Marvin Goodfriend is calling credit policy (see “Central Banking in the Credit Turmoil: An Assessment of Federal Reserve Practice”, Journal of Monetary Economics, forthcoming 2011). And in this case one that includes fiscal policy. I had never imagined that an independent central bank would be doing that.

Anyone who would have suggested the possibility of such a scenario at the onset of the Euro would have been called an ignorant at best, or a potential danger to the credibility of the Eurosystem at worst.