Today, the ECB raised its policy rate by 0.25 percentage point to 1.25%. This came hardly as a surprise, given the various statements from ECB officials in recent weeks. Many commentators have motivated this by the increasing HICP inflation. However, I would argue that there are other just as applicable, if not better, reasons. Namely that economic activity is picking up, and unemployment is crawling down. Indeed, in the press release following the rate increase, Governor Trichet states

Let me now explain our assessment in greater detail, starting with the economic analysis. Following the 0.3% quarter-on-quarter increase in euro area real GDP in the fourth quarter of 2010, recent statistical releases and survey-based indicators point towards a continued positive underlying momentum of economic activity in the euro area in early 2011. Looking ahead, euro area exports should be supported by the ongoing recovery in the world economy. At the same time, taking into account the relatively high level of business confidence in the euro area, private sector domestic demand should increasingly contribute to economic growth, benefiting from the accommodative monetary policy stance and the measures adopted to improve the functioning of the financial system.

I have previously referred to my empirical analysis of ECB interest rate setting, wherein Morten Aastrup and I find that the ECB predominantly changes the policy rate in response to changes in activity measures like unemployment, but not at all to inflation developments per se.

Recent data for inflation and unemployment and HICP inflation does not contradict these findings. Inflation has been allowed to crawl up to 2.6% (0.6% above the official upper bound on a desirable inflation rate), while we now see a decrease in unemployment. Had the ECB followed more Taylor-type rule behavior they would have raised rates much earlier. But it seems to follow a credible anti-inflationary policy, under which one does not have to respond to actual inflation. 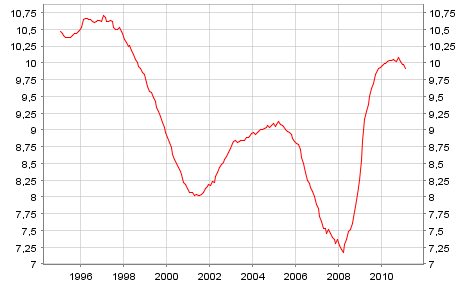 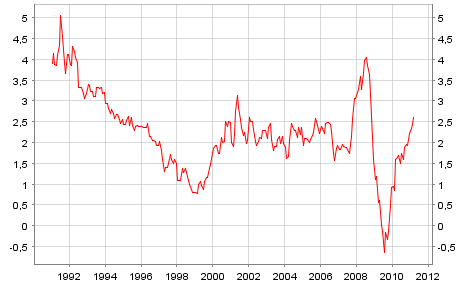