Today marks the last day of Jean-Claude Trichet’s tenure as president of the European Central Bank. Bild am Sonntag interviews him on the occasion.

In terms of being the main person responsible for the ECB’s mandate of price stability, he has been a success. The inflation measure used by the ECB has moved quite closely around the value which after some introductory opaqueness is stated as close to, but not above, 2%. Surely, during the peaks of the financial crises there were upward and downward swings, but on average you would not call Trichet a man that leaves a bank with little anti-inflation credibility.

What he does leave is a central bank that holds a lot of government bonds of unknown origin. One can, however, guess that they come from countries in the Southern parts of Europe. Effectively, through the Securities and Markets Programme, the ECB has bought up bonds from governments in fiscal distress to dampen yields. As mentioned several times on this blog, this was in my view never the intention of the Treaty on Monetary Union, where the union central bank should be independent of government pressure of any kind.

But Trichet emphasizes that there was never any pressure, and that

It was for monetary policy reasons that the Governing Council, in full independence, adopted all the non-standard measures.

I am not sure whether a bad move gets much better when you admit that you did it completely on your own, and uses arguments about “monetary policy reasons” that many still don’t quite understand.

Fact is that the ECB, after the renewed activity in the SMP in August, now holds government bonds worth 173 billion Euros (slightly above 2% of total EMU GDP). It reflects a steady increase from the 96 billion in mid-August. This fact may be seen as an indication of a defeat of the Bundesbank-style hardliner approach to monetary policymaking. Indeed, former member of the ECB executive board Otmar Issing voiced strong critique of the SMP recently. Oh, and Axel Weber and Jürgen Stark both left the ECB after the SMP began . . . .

Well, let me give Trichet the final word for today. When asked about whether he thinks that money rules the world, he sympathetically answers:

“Money is a means, not an end; an instrument, not the ultimate goal; un moyen, pas une fin.”

Michael asks into the inflation performance of the ECB in more detail. If we look at inflation measured by the ECB’s own goal variable, percentage changes in the HICP relative to same month the year before, the data is: 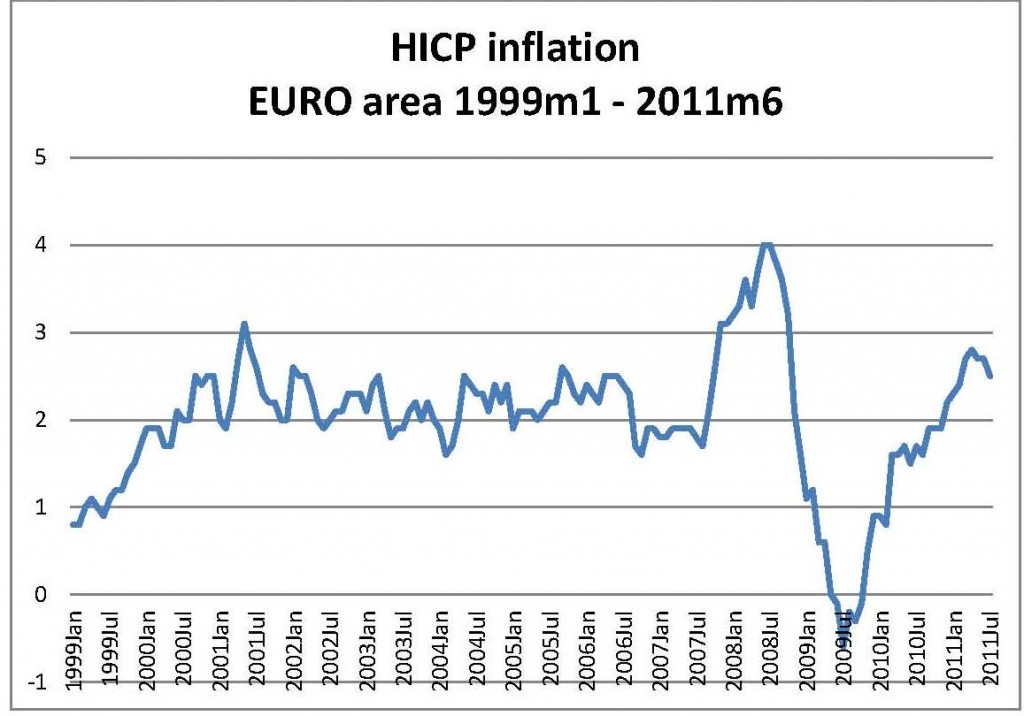 While this covers the whole lifetime of the Euro, it shows in a sense what is the status at the departure of Trichet. Quite intriguingly (and admittedly rather coincidental), the average of the inflation rate shown in the figure is 2.008. That is quite close to the stated goal of not having inflation above 2 %!

One Response to Trichet says Goodbye and SMP peaks at 173 bn. €